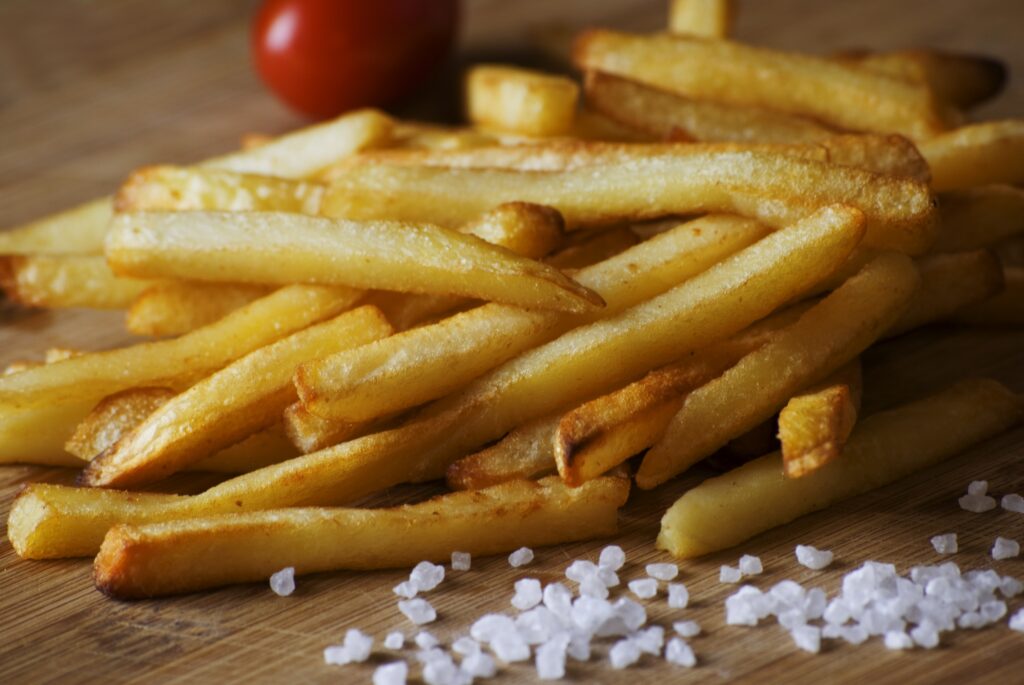 The origin of frites has been debated for years. Although the Belgians are convinced that they are the inventors of these delicious strips of deep-fried gold, the French claim that frites were first eaten at the Pont Neuf in Paris.

To trace the history of the frites, we have to go back to the discovery of the potato, a plant that is anything but Belgian or French. The potato originates from the Andes in South America, where wild varieties can be found up to an altitude of some four thousand metres.

In 1537, the Spanish conquerors brought the potato to Europe for the first time. As the warm climate in Spain and Italy was not too favourable for the plant, the cultivation of potatoes moved northwards. Within no time, potatoes were part of the diet of Germans, British and Irish. The Belgians and French also knew what to do with them.

Gradually, different ways of preparing them emerged, including fries or frites. And that is where the whole discussion starts. Both the French and the Belgians claim the popular dish. An old manuscript from 1680, for example, tells of the first Belgian frites. It is said that when the Meuse froze in winter and no fish could be caught, potatoes were cut into the shape of fish and cooked in fat.

The first mention of ‘French fries’ dates back to 1755, when the cookbook ‘Les soupers de la cour’ mentions the potato variant. The introduction of frites to the US is said to date back to 1802, when the then President Thomas Jefferson served ‘pommes de terre frites à cru, en petites tranches’ or potatoes fried raw in fat and cut into slices. It is possible that the recipe came from his French cook. Another possibility is that he brought the ‘recipe’ for the frites with him when he returned from France, after having been ambassador there in the 1780s.

As historical sources do not offer an unequivocal answer to the question of the origin of frites, the discussion about the origin occasionally makes the news. For example, French chef and kitchen historian Pierre Leclercq stated a while ago that frites are French to the core.

“It was around 1885 that chips first appeared on the streets of Paris. It was also around that time that the first recipes appeared in French cookbooks. These chips should not be confused with the homely pommes frites, which were fried in the 18th century. These were round fries fried in a pan with very little fat. Frites as we know them today – potato cut into sticks, fried twice – were invented in Paris.”

“Frying in fat is as old as the kitchen. So nobody can claim that principle. But for good frites, you need specific fry potatoes. And where were they first grown? In Belgium. Not in France,” Bernard Lefèvre, president of the national frites association Navefri, reacted at the time. “If they fried sticks of potato in fat in Paris in the eighteenth century, they will never have been as tasty as the frites we fry with our potatoes in Belgium.”

“Nowhere else in the world is the concentration of frietkoten (places where you can buy and eat frites) as high. That alone gives us the right to say: frites are Belgian”, Bernard Lefèvre concluded.

But it certainly is not the end of the discussion.